Life on the breadline: Surviving on $55 a week for food

Life on the breadline: Surviving on $55 a week for food 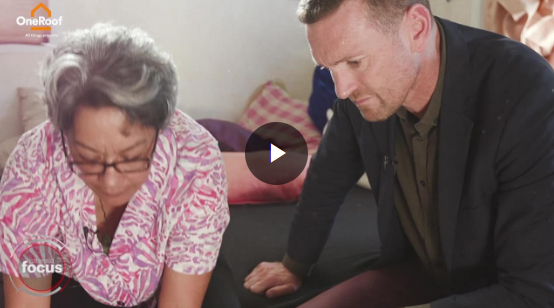 Two South Auckland mothers have opened their finances - and their fridges - in a bid to show how desperate food insecurity has become for low-income families.

Papakura mother-of-two Louise says she's forced to feed her family on less than $60 a week despite working as a teacher aide at a local school and living in a house shared with extended whanau.

"The rest of my wages goes on car payments, petrol and paying board for me and the children.

"To other people it seems unrealistic but once you get used to it, it's do-able."

Louise's budget is so tight that she normally stores her groceries in two small chilly bins in the bedroom she shares with her daughter, rather than the communal fridge in the kitchen.

"I like to have my own supply. It's just a bit easier to keep an eye on what you've got and what's going out when it's in a chilly bin in my room."

When it comes to perishable goods that have to be kept cold, Louise has a simple solution.

"I buy groceries every day in small amounts. We don't eat a lot of meat. We can't afford to."

Louise says she earns almost $200 less per week than what she would if she was on a benefit - but has no plans on giving up a job she loves.

"I try and pay all my automatic payments off before the school holidays and then I go to Work and Income and ask them can I have Emergency Assistance just to get through Christmas which is six weeks without pay.

"Like all mums on a tight budget I lose sleep. I lose my appetite. I have to watch out for depression. It can be pretty tough."

Just around the corner another solo mother of two allows us into her house - but this time gets the principal of the local intermediate to do the talking.

There are just two carrots, an orange, some margarine and a half-full bottle of tomato sauce left on the shelves.

"The mum of this family is a very strong budgeter," says Papakura Intermediate Principal Bec KauKau.

"Every cent is accounted for. But after bills and rent have been paid for, she only has $100 to cover food and any extras that might need to be paid.

"I'm finding out parents are budgeting extremely well, wasting nothing. But one little hiccup and it all gets thrown."

KauKau says such tight food budgets are far from unusual, with many students at her school coming from families who struggle to put food on the table every night of the week.

"The thing that hurt my heart was that every Mum I spoke to said at some point that they sacrifice food, so it's: 'dinner time, I'll wait until the kids eat, and I'll see if there's some leftovers that I'll eat', or 'I don't eat dinners' and that's heart-wrenching."

KauKau says her school provides a full-food option at school with the assistance of the children's food and clothing KidsCan charity because of the need.

"Our core business is learning but we understand the importance of making sure our kids are fed, hydrated and in clothes they need to be, so they are ready and able to learn."

'There is barely anything left for food'

"There is barely anything left for food and more often than not, fridges and cupboards are bare, telling the real story about how difficult it is for some families in our communities," she says.

"Most of us take for granted the fact that if we run out of something like milk, it's no big deal to replace it. Not so for thousands of families.

"The fact that we're now in 732 schools across New Zealand is quite astounding and shows that the need is real and is sadly increasing."

Chapman says it's important that the finger isn't pointed at parents who are doing their very best for their children.

"Even children living with two working parents are not finding it easy. We know that the majority of parents are doing the very best they can for their kids, but money only stretches so far and often, the first thing to go by the wayside are the basics like food and clothing."

Chapman says KidsCan is experiencing more requests for their support with 32 decile 1-4 primary, intermediate and high schools joining the charity's programmes since the start of the year.

"In past years I've have seen around 11 per cent of a school role accessing our food, but in 2018 that's almost doubled to 20 per cent. We need long-term solutions to material hardship, because I can only see the need increasing and that's just not okay."

She says providing the basics for children takes a huge amount of pressure off, knowing their children can be at school and have access to a sandwich, a muesli bar or fruit.

"How can these children possibly learn and be future contributors to our society if they're cold, wet and hungry?"

You can help families just like Louise by supporting a child now.